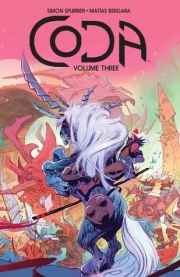 Hum is at rock bottom. His estranged wife has left him for good. He’s stuck in the middle of the harsh desert wastelands. And he’s even been abandoned by his mutant unicorn. But just as the world saw another tomorrow after the disastrous Quench...life goes on. Now, the former bard must discover for himself what it means to live -- to truly live -- in a broken fantasy.