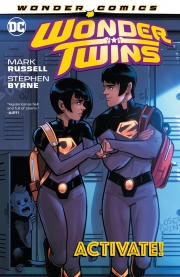 Exiled from their home planet, shape-changing alien heroes Jayna and Zan (she can morph into any animal, and he can turn into any form of water) must navigate life as students at Morris High School, where they're even bigger outsiders than the normal awkward teens they try to befriend.

Under the watchful eye of Superman, the brother-and-sister duo pull monitor duty at the Hall of Justice as interns, where they face Superman's impish foe Mr. Mxyzptlk as well as the deadlier-than-they-sound villains known as the League of Annoyance. They also learn some lessons from the Teen Titans' resident shape-shifter, Beast Boy, and struggle to overcome the pitfalls of Zan's brash confidence and Jayna's shyness. And, of course, there's a space monkey. There's always a space monkey.