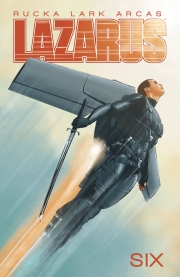 Two years have passed since Forever Carlyle was betrayed on the battlefield, and now the Carlyle Family finds itself surrounded on all sides, running out of both time and options, as the Conclave War claims friends and allies alike in an ongoing war of attrition. With time running out for her Family, Johanna goes on the attack with a strategy that relies on the Carlyle Lazarus―Forever―standing fast at her side. And while the war takes its toll as Lazarus fights Lazarus, the next Forever Carlyle―the 14-year-old known as “Eight” who is being groomed for service―finds herself in a life-or-death struggle of a different kind. The secrets are taking their toll, and when they come out, the results will be shattering.