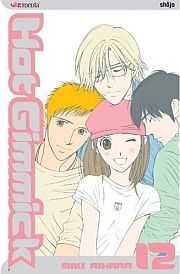 Synopsis : Normally, most teenage girls would be beside themselves with joy to have not one but three hot-as-they-want-to-be men in their lives, and if that were all that mattered, Hatsumi Narita would have been crowned Queen of Happiness a long time ago. But such is not the case. Her hunky childhood friend (now an über-studly male model) has tried to ruin her life on several occasions, her dreamy older (and adopted) brother wants to run off with her, and her cute on-again, off-again ad infinitum boyfriend continues to be the world's biggest jerk. Who on earth will she finally choose? Or will Hatsumi remain hopelessly hapless to the bitter end?