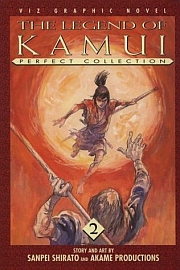 T2 - The island of Sugaru, Tome 2
The legend of Kamui perfect collection (V.A.)

Synopsis : Shipwrecked on an island, Kamui has befriended a female apostate ninja named Sugaru who, like himself, is being mercilessly hunted down for leaving the ninja clan. Since the two rescued Sugaru's husband from the despotic local lord, they have formed an uneasy alliance, and Sugaru's beautiful daughter, Sayaka, has fallen in love with her family's handsome guest.

Now, Sugaru's village is plagued by sharks. A band of mercenaries offer to rid their waters of the deadly predators. But it looks like they plan to eradicate more than wild animals from the vicinity...