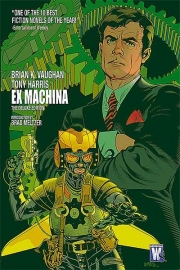 This deluxe edition collects the first 11 issues of EX MACHINA in hardcover for the first time, along with several special bonus features.