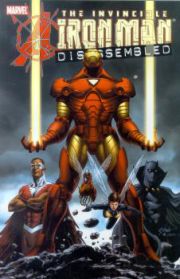 Synopsis : Some think Tony Stark has lost his battle with the bottle. Others think he can't control his violent temper. Some think he's a homicidal maniac. Even his closest friends are beginning to doubt him, wondering why he won't fend off these accusations. But Stark's self-imposed exile is cut short, as Iron Man must face off against his evil doppelganger, which has embarked on a murderous rampage aimed at those in charge of Stark Enterprises! Only one of them can remain standing. And even the victor is under threat of extinction.