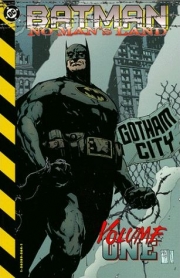 Synopsis : DC shook up Gotham--literally--in its 1999 Batman plot arc: a 7.6 earthquake rocked Gotham City, wreaking enough destruction to bring the broken, crime-ridden, runt kid-brother of Metropolis and New York to its knees. In the story line's most indulgent liberty, those fat cats in Washington decide to write off Gotham, à la Escape from New York, blowing up the connecting bridges, mining the surrounding waterways, and signing into law the Federal Declaration of No Man's Land, which makes it a crime to even set foot in the city. The usual suspects from Arkham Asylum, Two-Face and the Penguin, the Riddler and Dr. Freeze, Poison Ivy and Mr. Zsasz, file out to begin running the show, strong-arming and manipulating the block-by-block turf battles that envelop the now-ultraviolent city. A conflicted Batman shows up fashionably late, only to find that these lunatics are the least of his worries: Lex Luthor, Superman's archfoe, has nefarious designs on Gotham too.