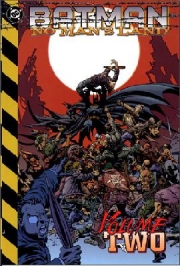 Synopsis : In the second installment of the NO MAN'S LAND storyline, Batman and his allies continue their fight to save Gotham during its darkest hour. Taking on a new costume and persona as Batgirl, the Huntress joins forces with Barbara Gordon, the former Batgirl, while Nightwing, the former Robin, tries to help the city's remaining citizens in any way he can. But as Batman begins to realize that he is fighting a fight he can't win, he collapses into a state of despair from which he may never recover.