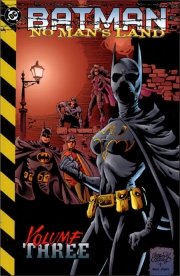 Synopsis : Batman, Robin, Nightwing, Commissioner Gordon, and the Huntress (back to her former guise), continue their war against the gangs and super villains who want to take control of the quake-ravaged Gotham. As Mr. Freeze, Poison Ivy, and Clayface each make their individual plays for power, Superman visits No Man's Land for the first time and the newest Batgirl makes her first appearance ever.