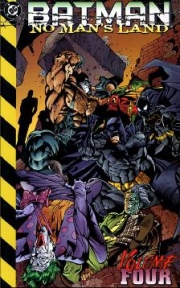 Synopsis : In the fourth installment of the No Man's Land saga, Batman and his allies continue their quest to bring justice back to Gotham. But as Batman, Nightwing and Batgirl try to defeat the warring gangs of the city and reclaim Gotham, Bane, the man who once broke Batman's back, returns with his own self-serving agenda. Now, battle weary and physically depleted, the Dark Knight must find the inner strength and mental toughness to face the one man to ever defeat him.