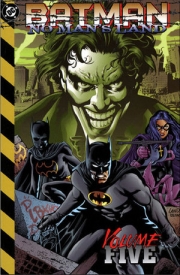 Synopsis : In the fifth and final installment of the NO MAN'S LAND saga, Batman begins to see the light at the end of the tunnel as the United States government step in to restore Gotham City. But after months of physically fighting for his city, the Dark Knight might see all of his work go in vain as Lex Luthor plots to own Gotham. While working against this "hostile takeover" as Bruce Wayne, Batman learns that his greatest foe, the Joker, has returned. Now, at his physical and mental breaking point, Batman must simultaneously fights battles on two different fronts.