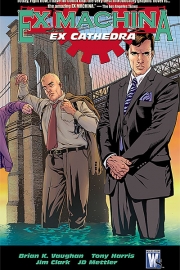 Synopsis : Collects
Ex machina (2004) #30-34
Mayor Mitchell Hundred is summoned to Rome for an audience with the Pope. But as Hundred makes his travel plans, he is unaware of the assassin who has him in his sights.