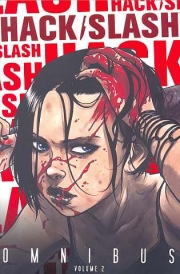 Synopsis : In almost every slasher movie, there's one girl who makes it all the way to the end. She's the survivor... the Final Girl. Meet Cassie Hack, the lone survivor of an attack by the vicious slasher known as The Lunch Lady, a killer wh happened to be Cassie's Mother! Now Cassie and her monstrous partner Vlad travel the country, hunting down and killing slashers before they can leave a trail of blood and terror.

This collection combines two years' worth of award-winning issues from the HACK/SLASH ONGOING SERIES #1-17 ( including the crossover with The Reanimator, Herbert West!), as well as the HACK/SLASH ANNUAL featuring THE SUICIDE GIRLS, into one horrific, hilarious and heart-breaking volume.