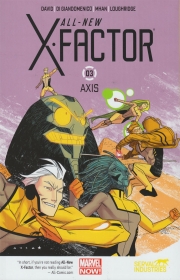 Synopsis : Collects
All-New X-Factor (2014) #13-20
AXIS tie-in! Quicksilver is finally reunited with his estranged daughter, Luna...but the Inhumans aren't too happy, and they just might have something to say about that! Meanwhile, Washington is burning - but with the effects of Axis felt across the world, will Serval Enterprises' X-Factor help put out the fire? Or will they watch it burn? Plus, because the series doesn't have enough robot romance, Warlock makes a move on Danger!
source : editor