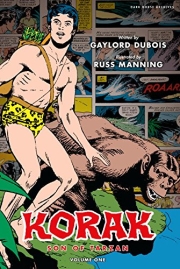 Synopsis : Collects
Korak, Son of Tarzan (1964) #1-6
The son of the jungle lord gets his own title, in this beautiful, imaginative spinoff from longtime Tarzan writer Gaylord DuBois and fan-favorite artist Russ Manning! In the first of two volumes collecting Manning's complete run on the series, Tarzan and Jane's son, Boy, takes the name Korak - in the language of the apes, "The Killer" - alongside his chimpanzee sidekick Pahkut, and begins to carve out his own legend among the creatures of Africa. Every bit as exciting and gorgeous as DuBois and Manning's work on Tarzan, these tales of a boy becoming a man are rip-roaring adventure for fans of all ages.