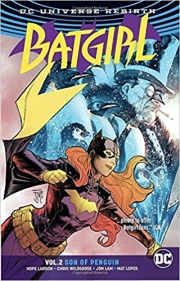 Synopsis : Collects
Batgirl (2016) #7-11
After a globe-trotting adventure with the greatest fighters on Earth, Barbara Gordon—a.k.a. Batgirl—is glad to be back in Burnside, Gotham City’s coolest neighborhood. There’s just one problem: everything’s changed, from her school to her friends to Burnside itself.

But there’s an even bigger problem headed Babs’ way. Turns out the tech mogul who’s transforming the town is none other than Ethan Cobblepot—the estranged son of the crime lord better known as the Penguin!

Yet Ethan and his father don’t seem like birds of a feather. He’s handsome, he’s heroic and he just might win Barbara’s heart. Can she trust this new man in her life—or will his villainous parentage kill their fledgling relationship before it even gets off the ground?