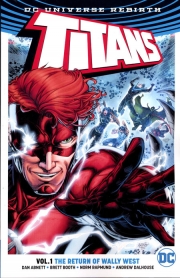 Synopsis : Collects
Titans (2016) #1-6
Titans: Rebirth (2016) #1
The members of the super-team known as the Teen Titans were heroes but, more than that, the best of friends. A special bond held them together through even the toughest situations.

Then their connection became a memory. And that memory faded, stolen from time. Only one person remembers. His name is Wally West. Once upon a time, he was Kid Flash, but now he is a refugee from a lost universe and it's up to him to reawaken his former friends and re-forge their bond.

Nightwing. Donna Troy. Beast Boy. Arsenal. Lilith. They must come together and defeat the enemy who destroyed their memories or be destroyed themselves.