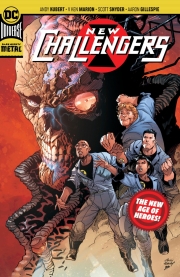 Spinning out of the best-selling Dark Nights: Metal epic comes New Challengers, a group of fearless explorers who will uncover the worst--and weirdest--the DC Universe has to offer.

A new team of misfits are given a second chance at life by the mysterious figure "The Professor"...but only if they're willing to explore the most unknown reaches of the universe. Seeking a set of powerful artifacts, the team must defeat a rival group of explorers to combine them...or the world as we know it could end.