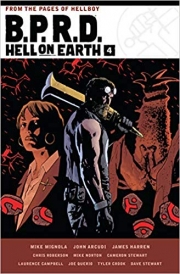 The B.P.R.D. continues to lead the defense against the apocalyptic Ogdru Hem from Japan to America, as the team splits up and Kate is possessed. Howards and a team of agents find themselves attempting to liberate a small town that holds secrets from Howards' hyperborean past.

Elsewhere, B.P.R.D. field agent Ashley Strode attempts to purge a demon from a 100-year-old exorcist, utilizing a deadly rite that sends both of them into a spiritual hell and setting her on a path to battling a demon who is kidnapping and eating children.