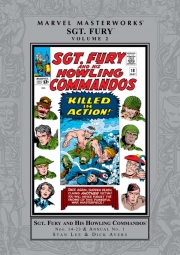 And get ready for another k-ration of the adventures of Sgt. Nick Fury and His Howling Commandos! From the heart of the Marvel Age, Stan Lee and Darlin’ Dick Ayers bring you an assortment of WWII adventures that define the "War comic for people who hate war comics!" That means it’s for you and everybody else, bunky!

Fury and his crack squadron tackle the Axis powers across both the European and Pacific theatres - over land and under sea, from the scorching sands of North Africa to the darkest jungles of Burma, there’s no order too tall for the Howlers!

They’ll square off against Baron Strucker and his cadre of Nazi commandos, the Blitzkrieg Squad; they'll meet the young Hans Rooten for the first time; and before you finish turning these pages one will fall in the line of duty, forever changing the life of Nick Fury.

To top it off, we’re including the first Sgt. Fury Annual featuring a rare adventure of the Howlers in the Korean War and the story of Fury’s promotion to Second Looie!