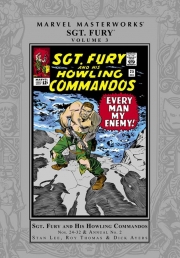 Report for duty! It’s time for another Marvel Masterworks mission with Sgt. Nick Fury and his Howling Commandos!

It’s all-out action against the Axis powers, done in the Mighty Marvel Method as Fury and the Howlers protect the Manhattan Project and the atom bomb against Nazi spies and saboteurs; uproot an undercover agent who is none other than Red Skull; confront a traitor in their own ranks; and go mano-a-mano with Baron Strucker in a knock-down, drag-out battle in war-torn France.

You’ll also see revealed – for the first time – the origin of Nick Fury’s eye-patch, follow Dum Dum Dugan as he goes it alone behind enemy lines, and experience the Allied push when Operation Overlord comes together on D-Day!

Illustrated by the fightin’ man’s penciller, Dick Ayers, and scripted by Stan “The Man” and his armed-forces heir apparent, Roy Thomas, it’s an all-out classic. Reserve your copy today or it’s gonna be K.P. duty for you!