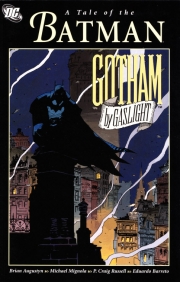 Synopsis : The book features Batman in 1889, he combats Jack the Ripper when the serial killer comes to Gotham City. Unfortunately one of the main suspects is Bruce Wayne himself. The cast includes Commissioner Gordon, Alfred Pennyworth, and Princess Julie Madison. The Joker makes a cameo appearance as a bluebeard who tries to kill himself with strychnine poison, but is left with a paralyzed rictus grin.