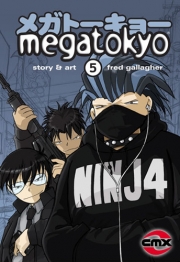 Synopsis : Megatokyo began in 2000 as a Web comic (www.megatokyo.com) produced by Gallagher, Caston and Dominic Nguyen, with appearances by friends and significant others, all involved in manga, anime and computer gaming. The online strip quickly attracted a big Internet audience. It's the story of Piro, a manga/anime fan, and Largo, a hardcore gamer, alter egos of the comic's co-creators. They hop a plane to Tokyo, the Mecca of their Japanese pop culture obsessions: computer games, Japanese comics, anime and, of course, cute Japanese girls in school uniforms. The two max out their credit cards and end up stranded. Readers soon learn Piro is vaguely depressed and comically frightened of the cute girls he fantasizes about, while Largo has problems separating reality from virtual reality. Besides being a funny sendup of a new generation of American "Otaku" (Japanese for anime/gaming fanboys), this is also a clever record of the methodical development of a Web comic and the evolution of Gallagher into a formidable American manga-ka, or comics artist. This is a series of deft and sensitive character studies, whimsical portrayals of young people learning about themselves and their emotions. The book collects the original Web comic's square four-panel grid; beneath the originals, Gallagher has added a recurring image of Piro humorously providing a running commentary on the ups and downs of the strip's weekly development. Gallagher's pencil drawings grow in their command of manga style and are impressive for both sensitive linework and his bold depiction of comical action sequences. Megatokyo is a delightful and imaginative work of American manga.